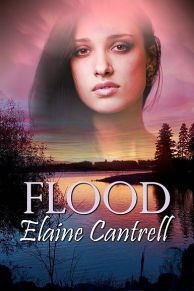 A few years ago there were devastating floods in the midwest. For many nights the TV news showed scenes of rescues and destruction. I started to think that maybe a flood might make a dynamic story, so I wrote a romance centered around a flood. I named the book Flood, but if I had it to do over I’d call it Peaches and Caleb. Oh well. Too late now. I thought I’d share an excerpt from the book. In this part my hero Caleb is trying to free the heroine’s mother from a flooded basement.

Caleb plunged his hands into the murky water, frantically feeling the bottom of the heavy shelving unit. No, oh no. Two thin bands of steel anchored the shelves to the floor in spite of the fact that they’d fallen over. They held Clairee’s leg in a vise grip. Needed something heavy to pry them loose. Where to look? Corner? Work table? Nothing.

“Clariee!” he roared as water totally covered her face. Grabbing her under the arms he jerked and tugged even though he knew he wouldn’t be able to move her.

At that moment something big and heavy struck the house from the river side. The cabin shivered, and he felt it shift on its foundation. The shelves! The shelves were moving! The bands must have twisted loose.

“Clariee?” He was yelling now.
No answer.

The water in the cellar came to his chest. He threw her over his shoulder and bolted up the ladder into the kitchen. He laid her on the floor and commenced CPR. “Breathe! Breathe!”

She gasped and coughed up a torrent of water just as the flood entered the kitchen through the cellar door. He sprang to his feet, tossed her over his shoulder again, and ran for the boat. Darkness almost swallowed the thin beam from his flashlight, but he saw the boat bobbing wildly on the choppy current. Could they really reach safety in the dark on what amounted to a canvas raft?

Something cold and wet covered his ankles. No choice now. They’d have to take their chances. They couldn’t stay here.

He wrestled Clariee into the boat and climbed in after her, the raw power of the current sending a spike of adrenalin racing through his veins. If he untied the rope that secured them to the porch, the current would sweep them away, and in the dark he wouldn’t be able to see where they were going or what might come out of nowhere to crush them.

He grabbed for Clariee as a particularly big wave sent her tumbling toward him. Oh, sweet goodness! A bone was sticking out of her leg just below her knee. What to do? What to do?

Elaine Cantrell was born and raised in South Carolina. She has a Master’s Degree in Personnel Services from Clemson University and is a member of Alpha Delta Kappa, an international honorary sorority for women educators. She is also a member of Romance Writers of America. Her first novel A New Leaf was the 2003 winner of the Timeless Love Contest and was published in 2004 by Oak Tree Press. When she isn't writing you can find Elaine playing with her dog or maybe collecting more vintage Christmas ornaments
View all posts by Elaine Cantrell →
This entry was posted in Books, Elaine Cantrell, Miscellaneous. Bookmark the permalink.