Ringing in the New Year

New Year’s Eve isn’t a special occasion at our house. Since my hubby is usually asleep by the time most people are eating their dinners, I’m usually sitting here alone, either watching television, reading, sewing, or eating. So this week’s topic, asking about my most memorable New Year’s Eve, had me thinking for a while. I was able to recall four times when something stood out enough for me to recall the holiday that year:

December 31, 1983: I was eight and a half months pregnant with my first baby. I’d gained almost fifty pounds, and getting around was difficult. The baby wasn’t due for another three weeks, and I wasn’t sure how I would handle returning to my teaching job after the holiday. My parents threw a New Year’s Eve party and invited hubby and me (this is before his internal clock put him on a sleep schedule that would be more suited to a country on the other side of the Atlantic), and we went. I wasn’t really in a party mood, but hubby figured I needed something to take my mind off my sore legs, aching back, and constant cravings. I remember most of the other guests urging us to try all sorts of tricks to get me into labor so that we’d have an extra tax deduction for ’83. Fortunately, hubby laughed them off, and our daughter was born a week later. 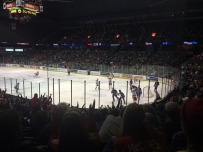 VanAndel Arena is home to the Grand Rapids Griffins. You can see how big a party it was for Y2K!

December 31, 1999: The city of Grand Rapids threw a special event at Van Andel Arena, the brand new convention center in town. It was going to be a huge party, and performers included everyone from celebrities to area high school musicians. My daughter (the one born just after the previously described New Year’s) played in the high school marching band, which had been invited to perform. Ticket prices were quite high, so I didn’t buy one. Apparently, no one else in town did either, because the organizers ended up giving them away – each participant got four free tickets! It really was a great show, and I’m glad I went. I took my parents, since hubby was asleep. 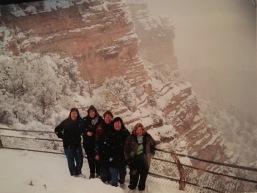 I remember wondering if we were really in Arizona, or if we’d somehow returned to Michigan!

December 31, 2001: I described this a few weeks ago when we wrote about unusual holiday celebrations. My daughters traveled to Phoenix, AZ to march in the Fiesta Bowl Parade and marching band competition. I managed to find three other band moms who wanted to go along (sans husbands) and we shared a room as well as a rental car. On New Year’s Eve, we went to the Grand Canyon. I love visiting national landmarks and was excited to be visiting a place I’d heard so much about. I was also happy to be in a warm place, as opposed experiencing the record snowfall that plagued West Michigan. Unfortunately, the snow followed us to Arizona, and we not only drove through the snow, but intense fog covered the area and we were unable to see across the canyon! Celebrating with the other parents that evening was fun.

My favorite people to party with!

December 31, 2015: Last year, my older daughter and her husband were invited to a New Year’s Eve party and asked if their two children could come and have a sleepover at our house. Of course, we were glad to oblige. This is one of the few times when I’m thankful for hubby’s strange hours. When they spend the night, I take care of the kids until they go to bed – this is the fun time, playing games, reading books together, then brushing teeth, saying prayers and tucking them in. Then I stay up and take care of my writing/marketing and read until I’m ready to sleep. When the kids get up (usually around 7 am), hubby is up and ready to make breakfast for them. By the time I get up, they’re happily watching cartoons or playing with some of the toys they leave here. This division of labor works well for us. We’ve got another sleepover planned for this week, so I doubt they’ll be here for New Year’s Eve 2016. But if their plans change, we’re ready and willing!

If I had to choose a favorite, I guess it would be last year. I don’t usually dwell on the past and wish for things to be repeated. I like to enjoy what’s happening in the present – so next year, I imagine my favorite New Year’s Eve will be this one, even if I’m alone and celebrating with a mug of hot chocolate!

During her first career, Patricia Kiyono taught elementary music, computer classes, elementary classrooms, and junior high social studies. She now teaches music education at the university level. She lives in southwest Michigan with her husband, not far from her five children, nine grandchildren (so far), and great-granddaughters. Current interests, aside from writing, include sewing, crocheting, scrapbooking, and music. A love of travel and an interest in faraway people inspires her to create stories about different cultures. Check out her sweet historical contemporary romances at her Amazon author page: http://www.amazon.com/Patricia-Kiyono/e/B0067PSM5C/
View all posts by Patricia Kiyono →
This entry was posted in Holiday, memories, New Year's Eve and tagged celebrations, Grand Canyon, grandkids, new babies, New Year's Eve, Van Andel Arena. Bookmark the permalink.

7 Responses to Ringing in the New Year