I realize it’s Halloween and I’m supposed to be scaring everybody, so here’s a quick, token BOO! and then I’ll get on with my sales pitch during Free Week at 4F1H.

Yeah, this is an exciting part of every author’s journey — when you can finally hold in your hand the finished product you created … and flip the pages through your fingers.  Called to Arms Again, my third novel (published in digital formats in May 2013), has just been released in paperback.

Sure, the paperback costs more than the digital copies – and I realize I don’t make as much (in royalties) per copy purchased – but there are still many avid readers who don’t yet possess Kindles, Nooks, Tablets, or whatevers.  In fact, among the folks of the Greatest Generation – to whom I pay tribute in my book – I suspect there are relatively few using digital readers.  They need to know that I honor them and their sacrifices.  I want my story in the hands of every one of that generation who’s still living — and these folks are dying at a rate of some 2000 per day!

If you’re a Boomer — your parents, aunts, and uncles were members of the greatest generation.  Buy this book and read it yourself, because you’ll recognize these characters.  If you’re the child of a Boomer Generation parent, you need to read this so you’ll understand what your grand-parents (and their siblings) went through and how they prevailed.

If you were born before about 1929, you ARE part of the Greatest Generation and you’ll find yourself and your friends in my story!

Read it!  Pass the word!  Get this story into the hands of everyone who loves America! 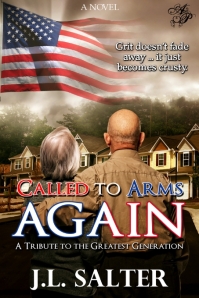 Grit doesn’t fade away … it just becomes crusty.  With harrowing elements right out of today’s headlines, this story reaches back into the sturdy heartbeat of people raised during the Depression and tested during World War II.  Though the old uniforms haven’t fit in many decades, their resilient spirits still have that same intensity which helped save democracy.

It’s the story of a newspaper reporter looking for a new angle for her Veterans Day special section.  Who better to give her a fresh perspective than a bunch of old war dogs who’d been there and back.  Not only does Kelly Randall learn what the Greatest Generation was made of, but she soon discovers a great deal about her own mettle.

My story has action, comedy, romance, and an unashamedly healthy dose of patriotism.  You’ll laugh, you’ll cry, and you’ll cheer.

Digital copies are still only $2.99 and available in too many formats to mention.

If you’d like more info on Called to Arms Again, here’s my blog from the week before this title released in digital format:

8 Responses to C2AA Now in Paperback