What an exhausting summer it’s been! And it’s only begun. But it seems that the busier I get, the more I read. Reading relaxes me and helps me unwind, especially when there’s a happy ending. I guess that’s why I gravitate toward romance! So despite my hectic schedule, I read and reviewed five wonderful romances this month. I’m still on track for completing fifty books by the end of the year! 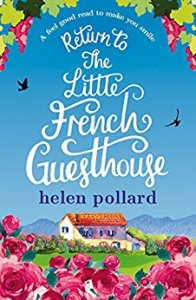 Return to the Little French Guesthouse by Helen Pollard
I enjoyed reading this continuation of The Little French Guesthouse. Emmy makes the wrenching decision to give up her job in England and return to the place where she experienced both heartache and joy. Now she has a new job, which immediately turns into an unbelievable series of headaches, a new boyfriend who apparently has kept a few secrets from her, and new friends, who stick by her despite her often neurotic tendencies. I got a little impatient with Emmy at times, but I was glad she had people around her to set her straight. And by the end of the book, I learned that the word marquee means something entirely different to a Brit than what it does to an American! I’m looking forward to reading Book Three in the series.

The Reluctant Bride by Sharon Kleeve
I’ve read and reviewed Sharon’s books before, and like her previous romances, The Reluctant Bride contains a strong, compassionate hero (a private eye named Ferguson) and an equally strong, motivated heroine (a wedding planner named Penelope) who overcome obstacles on their way to a happy ending. But this story had some problems that prevented me from enjoying it as much as Kleeve’s previous books. There were several editing problems that caught my eye. Characters were mentioned without prior introduction, and one character magically became plural in the middle of a scene. Also, the ending was a bit too sappy for my taste. The premise and basic story line were good, but the execution needed a bit more work. 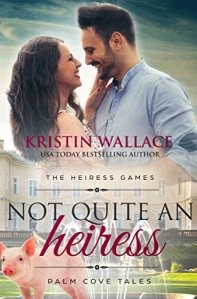 Not Quite an Heiress by Kristin Wallace
The Heiress Games, Book Two

I pre-ordered the second in Kristin’s new series so that I could start reading it as soon as it was available. Like the first in the series, this story covers the challenge facing one of the possible heiresses to a considerable family fortune. But the heroine in this romance is the half-sister of the woman named in the will. Abby Douglas grew up thinking she was related to the esteemed Armington family, but an accident in her teens unearthed a scandal that rocked the small community of Palm Cove. She’s spent her life since then trying to blend in. She returns to Palm Grove to help Serena win the inheritance, not for themselves, but for someone dear to both of them. Ex-football star Killian O’Connor manages to see past the baggy clothes and proper mannerisms, but he’s got problems of his own. I enjoyed how they helped each other overcome their problems, and am looking forward to Book 3, when the real villain will be revealed! 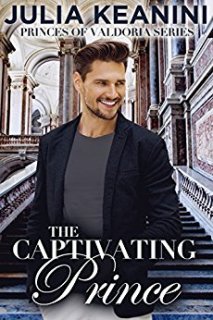 Prince Tristan is the second son in the Kane family. It’s well known that he never dates a girl more than once, and he’s dated almost every available woman in the kingdom. But Jewel, the Royal Tailor, has managed to avoid his many requests for a date. Since both Jewel’s parents work in the castle, she’s known Tristan all her life, and she’s not about to let the handsome playboy break her heart or jeopardize the position she’s worked so hard to get. I truly enjoyed this story. Tristan’s character arc is huge, but the progression is believable. The emotions from both main characters are well-described, and the anticipated happy ending is lovely without being overdone. I’m looking forward to reading about the next prince! 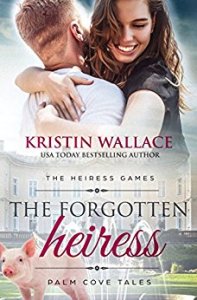 The third and final story in Kristin’s triology arrived in my Kindle library just a few days after I finished book two, so of course I had to read it right away to discover the answers to the big questions: who won the inheritance, and who kept sabotaging the competition? Both are answered, but not before the third heiress, Bailey, learns a lot about her connection with the family her mother left behind. Like books 1 and 2, the story covers the events making up the competition set up by Victoria Armington to determine which of her distant nieces will inherit the Armington fortune. The series is unusual in that all three books follow the same timeline and same events, but each is told from different points of view. I enjoyed the series, and look forward to the promised follow-up stories to be published this fall.

During her first career, Patricia Kiyono taught elementary music, computer classes, elementary classrooms, and junior high social studies. She now teaches music education at the university level. She lives in southwest Michigan with her husband, not far from her five children, nine grandchildren (so far), and great-granddaughters. Current interests, aside from writing, include sewing, crocheting, scrapbooking, and music. A love of travel and an interest in faraway people inspires her to create stories about different cultures. Check out her sweet historical contemporary romances at her Amazon author page: http://www.amazon.com/Patricia-Kiyono/e/B0067PSM5C/
View all posts by Patricia Kiyono →
This entry was posted in book review, Books, Patricia Kiyono, romance, TBR List and tagged Helen Pollard, Julia Keanini, Kristin Wallace, Not Quite an Heiress, Princes of Valdoria, Return to the Little French Guest House, Sharon Kleve, The Captivating Prince, The Forgotten Heiress, The Heiress Games, The Reluctant Bride. Bookmark the permalink.