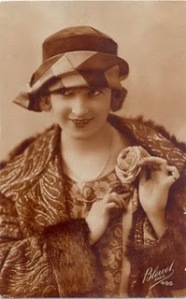 This week’s topic is about characters and descriptions. Daisy, the Monday Fox,  said a lot of what I had in mind about the craziness of the heroine looking in the mirror and gazing at her flowing tresses and her warm brown eyes.  Aye yi yi.  Very annoying and, as we all know, it seems to be a crutch for some writers.  And really, who does that? What person really does that? How much more likely are we to look in the mirror and fuss about a zit or how awful the rings around the eyes look after a late night?  How did it ever even become a cliche?

As for my own style, I like to sprinkle my descriptions in the story slowly and from the point of view of other characters. I’ve been accused of being very Hemingway-like in my descriptions (or lack thereof)- I find myself having to go back and insert them in the text when I’m on the second or third draft of the story.  You’ll never catch my characters perusing themselves in a mirror unless they’re slapping on some lipstick or shaving, but even then, they’ll be task oriented, not ego oriented.

In my book that comes out in July, the editor wanted me to take out a part where the villain discusses with the hero his desire for the heroine and his admiration for her large, unbound breasts. It had to be left in as the story occurs in 1920 when a lot of women bound their breasts to look like young boys. The flapper look was very much a flat chested look and my heroine is an anti flapper type. I felt it was important for this to come out in the story.  How crazy would it have been for her to discuss how great her boobs looked since they were unbound? Seems to me that would have been ludicrous. But can you just see it? Check it out:

Peg looked at herself in the full length mirror on the back of the bathroom door. She placed her hands under her large orbs and jiggled them. She giggled and whispered to her image, “your breasts are magnificent and will surely attract more men than those silly flapper girls.”

How could I do that to my character? Isn’t it better to have the villain lust after her? And in front of the hero, to boot?

The author of these blog posts is a lawyer by day and fiction writer by night.
View all posts by Author →
This entry was posted in protagonists, writing and tagged 1920, breasts, characters, descriptions, flapper, Hemingway, hero, heroine, July. Bookmark the permalink.