I have had my hands and head full the few days and I nearly skipped-out of this week’s blog,( for the first time). Then I realized that this is my first anniversary with” Four Foxes, One Hound” and I just could not do it. I have had a wonderful year here as the “Friday Fox” and it gave me the push I needed to get the other blog I had planned out of my head and onto the ‘net. So, thank all of you for your attention these past twelve months. I hope you have had nearly as good a time as I have.

With all that is on my mind, I was a bit pressed for a Father’s Day story or idea…until my niece suggested I do it on my sons as fathers. I am proud to say that both of my sons are wonderful, involved,responsible and loving dads, but since I needed more on the subject, I decided to interview another writer, my grandson, Jonathan, jr.

Jonny, What is the first memory you have of your father?

Getting shots, I was lying down low and we were at the Base.[Air National Guard base.]
I remember something before that. We were at the zoo and I remember throwing a candy bar away. Did they have carts at the zoo? I was in a cart with a seat. [It was probably a stroller] Yeah, a stroller. 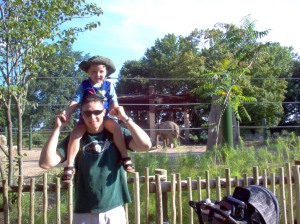 What is your favorite thing to do with your father?

Climbing. Practicing soccer. [ “I know you play video games”. That  made him smile.] 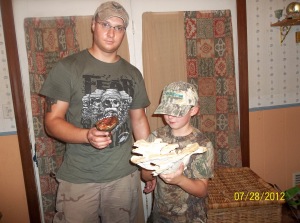 What are your favorite things that he has taught you?

To play tennis and  shooting guns. 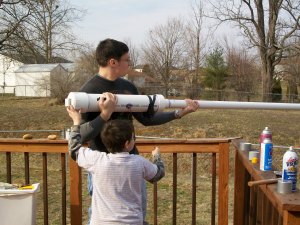 What is your favorite thing about your father?

He is nice and he does a lot of things with me.

What are you proudest of about your father?

He gets really good scholarships and he survived the war.[Iraq and a short time in Afghanistan] 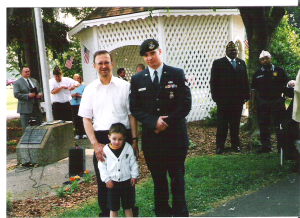 What the most important thing about him to you?

He can help me in a lot in sports and activities.

What would you like to do with your father that you haven’t done?

I want him to take me to Colorado. [His father was born there and took a trip back a couple of years ago…and his cousins have gotten to go with their father.]

Where have you had the most fun with your father?

Vacation in Florida last year.[First trip to the beach] 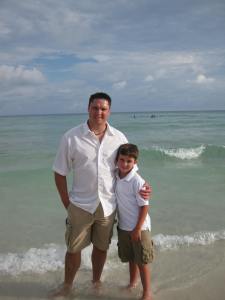 What do you think your father is most proud of about you?

What do you think is the most important thing about fathers?

Taking care of your kids.

Do you want to be a father?

What would you like to do with your kids?

Teach them how to write books and do a lot of things that they want to do.

Do you have any other thoughts on fatherhood?

To be nice to your children and [know] when to ground them.

[Well, that was more insight than I expected!]

We’ll end on that great note! I hope you enjoyed Jonny’s first interview and a look into our family. Does anyone have a question for or about Jonny?

[Jonathan Dominic Skube,jr. has enjoyed writing for years and started a series of children’s stories based on our family pets, known to us as “the Bella Series”. One day he hopes to be a published children’s author, as well as a veterinarian,(at least, that is the current plan.) He is ten years old, a Webelos Scout, is on a soccer team and has taken violin lessons for the past two years; (he has a wide variety of interests).  He is an avid reader and will be entering fifth grade this August. He is seen here showing his writings to “The Hound”, Jeff Salter, at the So.KY. Bookfest.] 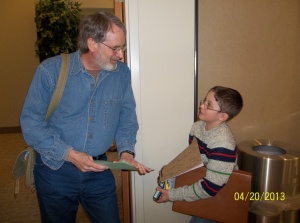 Tonette was a once-fledgling lyricists-bookkeeper, turned cook/baker/restaurateur and is now exploring different writing venues,(with a stage play recently completed). She has had poetry and nonfiction articles published in the last few years. Tonette has been married to her only serious boyfriend for more than thirty years and she is, as one person described her, family-oriented almost to a fault. Never mind how others have described her, she is,(shall we say), a sometime traditionalist of eclectic tastes.She has another blog : "Tonette Joyce:Food,Friends,Family" here at WordPress.She and guests share tips and recipes for easy entertaining and helps people to be ready for almost anything.
View all posts by Tonette Joyce →
This entry was posted in childhood, Jeff Salter, Tonette Joyce, writing, youth and tagged Afghanistan, Air National Guard, beach, beach vacations, blogging, child's view of fatherhood, children's insight, Colorado, family, fatgher/son relations, fatherhood, fathers, fathers and sons, fathers day, Florida, interviews, Jeff Salter, Jonathan Dominic Skube jr, memorial day, memories, potato cannon, school, service in Iraq, Southern Kentucky Bookfest, The Bella Series, trips to the beach, vacations, violin student, Webelos Scouts, zoo. Bookmark the permalink.

8 Responses to Son and Father