Once again, I find myself Facebook Friends with a writer who is also a psychologist.
(Perhaps I should ask them what this means?)

Mary Kennedy is a prolific writer with over fifty published works. She blogs with our friend Duffy Brown at Cozy Chicks. She and I share a fondness for food and cooking.
Mary is also a cat person.

I hardly know where to start!

You had published a non-fiction “A Psychologist’s Guide to Dream Interpretation” about the same time that you started your “Dream Club Mystery” series. Which came first, psychology or writing?   What drew you to psychology?

Oh, the writing came first. I’ve been writing for 40 years! I’ve always been interested in psychology and was happy to be accepted in a doctoral program.

The “Talk Radio Mysteries” has been described as “Frasier meets Murder, She Wrote”. Do you find that an accurate analogy?

Yes, it’s like Frasier because Dr. Maggie is a radio talk show host and psychologist and of course, she solves a murder in every book. (Just like Angela Lansbury solves a murder on every episode of Murder, She Wrote.) I was thrilled to meet Donald Bain (author of the wonderful Murder She Wrote series) at Bouchercon and he offered to write a cover blurb for Dead Air. I jumped at it! We had a nice chat and he was surprised that I could name his first book (he’s written over 100), it was Coffee, Tea or Me?
(I remember a made-for-TV movie with Karen Valentine…am I old or what? I wonder if it was based on that one? – T.)

Have you heard from other psychologists regarding these works?

I actually try to keep the two fields separate. I use my real name and my clients often look up my books. I have to remind them that Dr. Maggie is a fictional character.  Unlike Dr. Maggie, I’m not “tired of listening to their problems,” an unfortunate line that appears in Dead Air. 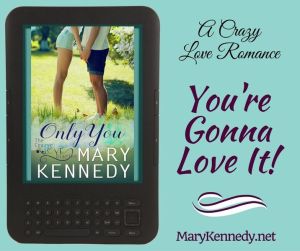 Your Crazy Love Diaries is from the perspective of a teenage girl, which were originally published in the 1980s, when you could not then have been far from that age. I think that a teenage granddaughter of mine would find them enjoyable and timely. The technology within the stories is current; when did you update them?

It’s really a challenge to add pop culture references to the teen books. Readers love them and it keeps the books lively, but if a couple of decades go by (or even a couple of months!) the material is dated and has to be re-written. It’s always a dilemma. I really enjoy writing for teens and my first 35 books were for Scholastic. The books were sold in book clubs all over the country and recommended by teachers and librarians. They had to be fun, exciting, and had to be squeaky clean. Later, I wrote the Hollywood Nights books for Penguin.

Another fascinating aspect of your life is that you studied at American Academy of Dramatic Arts, New York City. Had you considered acting as a career? I imagine that psychology would be extremely helpful in that line of work, (or any line of work, really). You use the knowledge acquired in your Hollywood Nights series. Will you tell us a more about your experiences in this area?

Considering that 98% of SAG members (Screen Actors Guild) are unemployed at any given time, I couldn’t really picture it as a viable career. It was a heady, exciting time, though, and I followed up with a Master’s degree in Dramatic Arts and Speech. I did a lot of voice work when we lived in Nashville, tons of radio commercial and narrating documentaries. I worked first as a radio copywriter for WKDA Radio in Nashville and then television news writer for WLAC-TV. Also some bit parts in movies and over 50 television commercials.

Later in North Carolina, I did a whole string of television commercials and had a speaking part in Natalie Wood’s last film, Brainstorm.

A few of your characters were transplants from New York to Florida.  Is that also drawn from your life?

Yes, I’ve always been a Florida fan. I love it and have been renting the same oceanfront condo in Ft. Lauderdale for 25 years. I discovered it when I needed a place to stay for a night before driving down to Key West to do research for one of the BoxCar Mysteries. 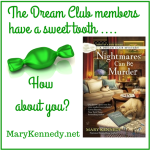 Your descriptions, especially of the Savannah homes in The Dream Club Mysteries, are some of the best I have read. Have you had an interest in interior design?

I have no talent in that area, just appreciation. When I watched the first episode of Southern Charm, I was fascinated by Patricia Altschul’s renovation of a Charleston library into a graceful southern mansion.

Nightmares Can Be Murder is the farthest I have gotten in that series, (other than quick peeks), and I have to say it is one of the smoothest reads for a cozy that I have seen in a while. Why did you choose to go for cozies? (I’m glad that you did!)

There’s something comforting about them. I asked Carolyn Hart (American’s Agatha Christie) why she liked them and she said it was because good always triumphed in the end. I feel the same way.

Now for the food! It plays a definite part in your stories, but you were also instrumental in The Cozy Chick’s Kitchen and Tea Time With The Cozy Chicks.  Do you find food creation to be as a creative an outlet as writing?

Yes, I think cooking is very creative and also relaxing. Fans of the Dream Club Mysteries know that the Savannah ladies love to cook and serve delicious desserts at all the meetings. And of course, the main characters own a vintage candy store so candy figures in the books, too.

Is there anything else you’d like to tell our readers?

I’d like to ask everyone to support animal welfare whenever they can. There are animals suffering everywhere, and your help can make a huge difference in their lives.

Thank you for being my guest, Mary. Please tell everyone how they can learn more about you and your work.

I blog every Monday with the Cozy Chicks, www.cozychicksblog.com