Letters to My Literary Hero

I could talk about several fan letters – including one to JFK, an unlikely one to Jackie Gleason, and one I’d intended to write to Ginger Rogers (before she passed away) – but since this week’s topic is letters to famous authors, there is really only one person to discuss — my hometown hero, Walker Percy.

I’ve made passing reference to Walker in some previous blogs, including:

https://fourfoxesonehound.wordpress.com/2011/03/24/most-influential-books-which-shaped-me-as-a-writer/  But I don’t believe I’ve detailed, here, much else about him.

I grew up in Covington LA where my parents were friends with Walker and his wife, “Bunt” Percy.  For a time, Walker and my Dad were in a local writers’ group together.  For a while, one of their daughters went to the same ballet class as my sister and my Mom either dropped them both off, or picked them both up … or (perhaps) both.

When Walker’s first novel, The Moviegoer, won the National Book Award in 1961, he was (of course) a celebrity.  But around Covington and St. Tammany Parish, he was just the same as he’d always been — a genuine, down-to-earth, gentleman.

One of my fondest memories was a ride in Walker’s Jon boat, up the Bogue Falaya River which his property fronted.  He showed us several things, including a sunken Confederate gunboat.  I recall several occasions in which I served Walker at the feed/seed store where he shopped and I worked.  I remember going to his house to pick up autographed copies of his novels.

But I didn’t actually read Walker’s novels until I was already married, moved away, and my parents gave me my own copies — also inscribed and autographed, of course.  I eventually read every novel Walker published and read one or two of them twice each.  Great stuff.

Walker wrote in long-hand and apparently revised a great deal.  Over his lengthy literary career, he only published six novels in the 26 years between 1961-87.  Those novels, plus two non-fiction monographs and numerous articles, were critically acclaimed both here and abroad. 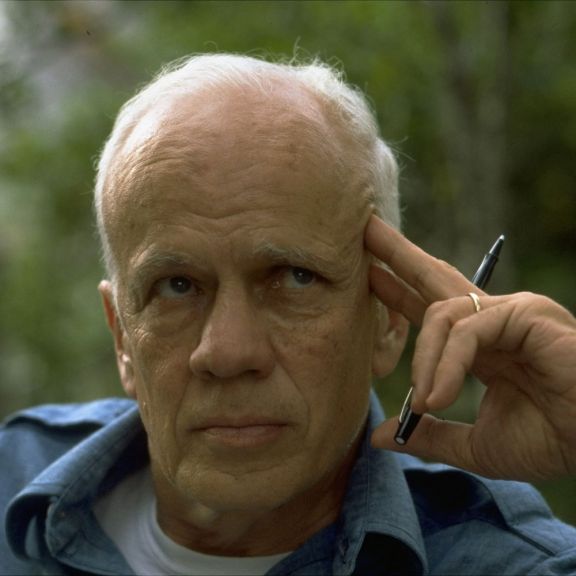 It was later, when I was in my first full-time library job, that I finally wrote to Walker.  I sent him a copy of a very complete bibliography – of his numerous articles, in addition to his monographs – which I’d compiled as a project in grad school.

Somewhere along the line, I bumped into Walker at a Louisiana Library Association Conference in New Orleans.  He was entering the hotel lobby and I helped him find the restroom and (later) the vendor booth where he was to autograph copies of his current novel.

Around that same time, I wrote a long narrative poem about Walker’s influence on me and that poem won an award.  I sent him a copy of my poem, along with an essay I’d written which had inspired the poem.  He responded graciously to both.

Later, I was appointed to the Editorial Board of the LLA Bulletin – that association’s quarterly journal – and it finally came time for me to write the introductory column.  Usually this was, “Blah-blah, we have a great publication and I’m glad to be on the board.”  But I got to thinking:  “What if I could get Walker to write this column instead of me?”  So I asked.  Walker said, “Sure, what should I write about?”  I replied, “Your column will reach every librarian in Louisiana (and some beyond).  What does an internationally-acclaimed author want librarians to know?”  [Or something like that].

So Walker wrote a wonderful short column expressing concern about the declining proportion of literary classics in local libraries.  As a librarian and English Major, I had to agree.  [Walker didn’t have much stomach for the plentiful paperbacks he grouped as “Barbara Cartland stories”.]

Well, whether readers agreed (or not) with Walker’s opinion of romance novels, his column was a hit … and even got extra national notice for our state association quarterly.  Walker and I had several letters back and forth during this period.

Later on, as other of his novels came out, I had a chance to review it for that same publication.  Walker and I exchanged a few letters about that also.

At one point, I had three of Walker’s letters framed and displayed on my library office wall.  He died in 1990.

I grew up bumping into a real-life gentleman who was already an international literary celebrity, but he never put on airs.  In fact, he actually shunned the limelight.  Walker apparently just wanted to write and read … and interact with relatives and a small group of close friends.

In every contact with me, however, he was quite responsive and extremely gracious.  I will always treasure my memories of him and the correspondence he sent in reply to my fan letters.

Note:  Walker is also briefly mentioned in my list of celebrities whom I’ve met:

Which famous author have YOU corresponded with?

21 Responses to Letters to My Literary Hero